Skip to content
Hawaii Guide > Past and Present > With its diverse population, the people of Hawaii practice many different religions 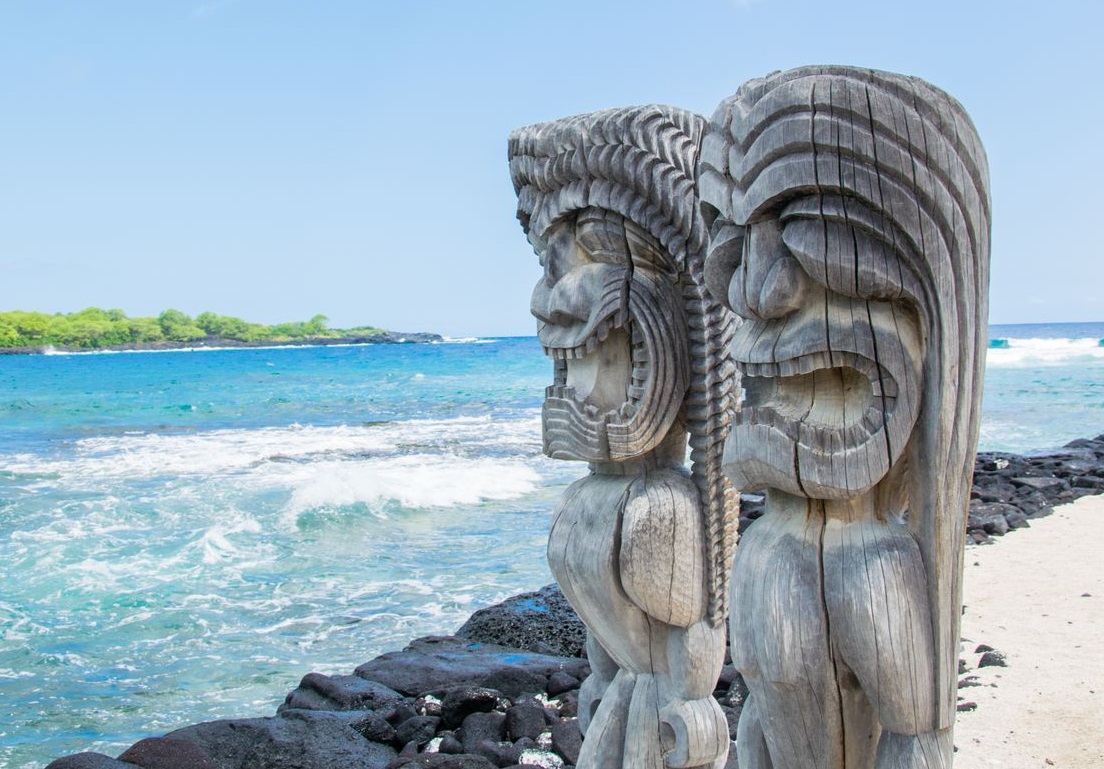 Over the last few centuries, people from many different countries have made Hawaii their home. With this wide range of Asian, European, and American backgrounds added to native Hawaiian heritage, a rich mix of religions gives Hawaii part of its distinctive character.

Early Hawaiians integrated spirituality into their daily life. In addition to the ruling chief’s laws, citizens abided by the kapu akua, or laws of the gods. Breaking a kapu led to severe punishment, and even death. If one who broke a kapu managed to flee to a pu’uhonua (sometimes called “city of refuge”), a period of penance there would save him or her from punishment.

Perhaps the most important concept was mana, spiritual energy infused in most people and things, including words. Chiefs were thought to have more mana than others, while a small group of people called kauw? (untouchables) had none. Kauw, were forced to live apart from everyone else, so their lack of mana wouldn’t drain it away from others.

Hawaiians worshiped many gods and goddesses. A few of the most important were K, ne (the creator), K, (god of war and politics), and Lono (god of agriculture, fertility, and peace). The annual harvest festival, Makahiki, welcomed Lono back to the earth to renew its fertility. During Makahiki, which lasted from late October until early February, no war, intense work projects, or politics could be undertaken.

The goddess P?le, the most well known Hawaiian deity outside the islands, held dominion over volcanoes. When she was angry, she caused the volcanoes to spew lava and hot ash to express her displeasure. Some still believe that taking rocks from the volcanoes invokes her wrath, bringing misfortune to anyone who possesses them.

But P, le had a fun side, too, as one of the patron goddesses of the hula. Hula dances originally held religious meaning. A special hieau (temple) was dedicated to the hula, where dancers pleased the patron goddesses with their performances. Over time, the dances evolved until they were performed for many reasons, including pure entertainment.

Several different types of hieau existed. Ruling chiefs built luakini, the largest and most ornate temples. Dedicated to K?, food offerings were left to keep the god there. If a situation warranted it, the gift of a healthy man’s life would be offered. A warrior killed in battle could be brought, or a criminal or slave might be killed for the purpose. At waihau human lives weren’t offered, and a heiau ho’?la provided healing.

Kahunas were spiritual leaders, who also specialized in a particular area or craft. To invoke blessings or gain guidance from their patron spirits, they performed rituals in the appropriate temple. Because words held a great deal of mana, chants and invocations had to be precisely memorized and performed perfectly to be successful. The kahuna nui served as the ruling chief’s spiritual advisor.

After the great King Kamehameha died in 1819, Hawaiians abandoned their traditional religion. All the kapu were abolished. Heiaus and other religious items were destroyed. However, the ruins of some ancient temples still stand today. Mo’okini Heiau, on the big island of Hawaii, is the oldest of them, built around 480 A.D. Also the largest, this stone temple covers an area about the size of a football field.

About half of Hawaii’s current population practices a form of Christianity. Catholics make up the highest percentage of Christians, but Protestants aren’t far behind. Almost any denomination which exists can be found here, as well as a fair number of non-denominational churches. There’s even a Mennonite church, with the state’s smallest congregation with less than 100 members.

With Hawaii’s large Asian population, religions from the Far East play an important role, too. Buddhism has the largest following among these religions, but Shinto, Hinduism, and other spiritual practices from the region can be found on the islands as well.

Taking in some of Hawaii’s religious traditions can be an enjoyable way to experience the islands’ culture. Listen to Hawaiian-language songs during services at Oahu’s Kawaiaha’o Church, where many of Hawaii’s monarchs were crowned. Stroll through the Japanese gardens at the Byodo-In Temple. Or visit one of the ancient heiaus for a trip to the past. You’re sure to have a divine time.